Note: This is the first part of a serialised article which will be developed over future posts. 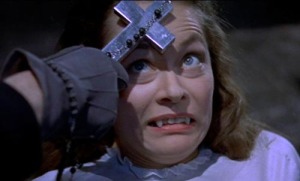 A few years ago I began to wonder where certain trends in current vampire fiction originate. Specifically I was curious about the plot that goes — girl meets boy, he is a bit pale and moody, he turns out to be a bit older and oh yeah a bloodsucking fiend (but a nice one). My curiosity took me to the 18th century, Byron, some pretty dodgy Hammer Horror films and a newfound interest in the interior decorating tastes of the undead.

Here’s what I found out:

A book that I need to acknowledge as a great source of information that has expanded my understanding, especially of pre-1980s vampires is Our Vampires Ourselves by Nina Auerbach.[1] In following posts I will summarise the case she puts forward and expand on her arguments with my own interpretations. The book was published in 1995: Pre-Buffy, Twilight and so on. I would love to hear of any writing of hers on recent developments if anyone knows…

Our Vampires Ourselves by Nina Auerbach

Auerbach puts forward that vampires are expressions of the times they are written or portrayed in. She traces the history of vampires as romantic friends in the 19th century through to Stoker’s vision of a vampire that brutally takes and invades: a model that lasted into the 1960s and 70s when vampires began to shift to reflect a period of sexual liberation and seduce their prey. This was followed by a “turning back” in the paranoid Reagan years of the 1980s that had vampire films reinforcing male dominance and existing as metaphors for lost youth and drug addiction. Auerbach concludes that “vampirism is wearing down and vampires need a long restorative sleep. They will awaken; as they always have; as Stoker’s Dracula boasted, time is on their side.”[2]

But they did not have to slumber so long and a new brand of vampire fiction emerged in the 1990s that was influenced but not tied to the previous trends that Auerbach discusses. The fictions produced reflect an increasingly youthful audience and the agendas of mass marketing and mainstream media giants. Crucially, they also reflect the ongoing struggle to come to terms with sexuality, and class and gender power imbalances, in the early 21st century. With many different vampire fictions around, this is not a period where either progressive or reactionary narratives dominate. Many people will be fans of both.

[1] Nina Auerbach, Our Vampires, Ourselves, The University of Chicago Press, Chicago and London, 1995.

2 thoughts on “The vampires’ journey – From Byron to Bella – Has vampire fiction lost its teeth?”