There are many films based on Dracula by Bram Stoker. Few of them closely follow the novel. Instead they are adaptions that reflect the times they were made in. One of the most noteworthy is Dracula directed by John Badham in 1979. Kate Nelligan’s Lucy is portrayed as an outspoken woman who is in control. She is no longer a passive victim. The men who are the traditional heroes of the narrative are portrayed as corrupt, incompetent and oppressive.

Spoilers alert: There will be some.

Featuring mind control, frequent animal transformations, sweeping cloaks and Dracula entering rooms by becoming mist, this Dracula movie seems to also have been a big influence on the visual style and portrayal of Dracula in BtVS Season Five. Like Buffy’s Dracula, Frank Langella’s Count is tall, civilised, charming and makes dramatic and romantic statements to the women he intends to feed on in a thick accent. 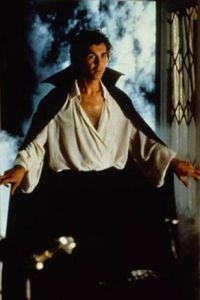 This version is also at times really creepy and disturbing; at one point we see a dead baby with its throat-gashed, left on the floor. The camera does not tastefully turn away as we might expect. The film is set entirely in a very grey and grim England, most of the action occurring in Dr Seward’s noisy mental asylum or Dracula’s dusty and ruinous home Carfax Abbey. The introductory portion of the book where Jonathan Harker travels to Transylvania to be entrapped by the Count is skipped entirely. This means Dracula can focus his attention entirely on seducing and preying on the two main female characters, Lucy and Mina. Characters from the original novel are mixed up and form a close-knit familial group with Mina (originally Jonathan’s fiancé) being Van Helsing’s daughter. Mina’s friend Lucy is here engaged to Jonathan while Dr Seward who originally courted Lucy is here her father.

When Dracula arrives in Whitby in England on the ship whose crew he has killed he jumps off the ship in dog form. He then allows himself to be found by Mina as he lies on the beach. As he takes human form a hand appears under his coat and he takes Mina’s hand. So the first time we see Dracula in the film he is making a romantic gesture. On the surface he is a civilised gentleman who charms everyone when he arrives in Whitby. The Dracula of Bram Stoker’s novel wasted no time with such niceties. He did not socialise with his prospective victims but set about draining Lucy at night, unknown to her. This Dracula played by Frank Langella, is handsome, well spoken and at a dinner party joins Lucy for a dance. 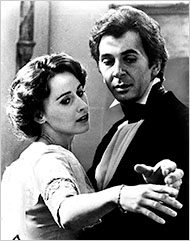 When Dracula breaks into Mina’s room at night while Lucy is with Jonathan, his entrance is initially terrifying to her, but then she seems enthralled and exposes her neck to him, welcoming him like a lover. The next morning she dies (the movie moves at a much quicker pace than Stoker’s novel). Dracula then sets about his seduction of Lucy, which is a bit less abrupt than his relations with Mina. He invites her round for dinner and eventually they kiss. During this scene, and others with Lucy and Mina, Dracula speaks many of the lines that in the novel he speaks to Jonathan in Transylvania, forming an introduction to his character. For example, he speaks of being from an old family. In this version his introduction to, and relationship with women is much more central than in Stoker’s novel. The men, such as Jonathan and Van Helsing, are quite inconsequential to him. They only seem a nuisance to Dracula as they form obstacles in his pursuit of Lucy. His strength and transformations make it easy at first for him to push them aside and evade them. 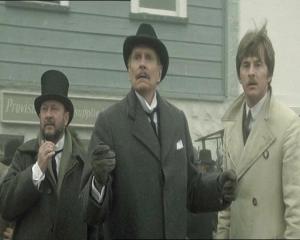 The unheroic men of Badham’s Dracula

When Dracula bites Lucy and shares his blood with her a romantic orchestral overture and psychadelic visuals evoke sex and blood. Although Lucy is certainly under some kind of thrall of Dracula, unlike his other victims she seems willing and in control, and an equal. This is partly conveyed by her establishment early in the film as an independent woman. But then to remind us of the horrific consequences of Dracula’s actions we see Van Helsing and Dr Seward find Mina in an undead and hideous state. Unlike the beautiful vampires we are accustomed to today, Mina is decomposed and zombie-like as she embraces her horrified father. We are reminded that she (and therefore Dracula) was responsible for the horrible murder of the baby.

MIna – The ugly face of vampirism

Lucy continues to show signs of inner strength and independence when she leaves her home to head to Carfax Abbey. After the men catch her up she does not meekly return but stands her ground, striking out at Van Helsing with a cane and attempting to drive her horse and carriage past Jonathan. Unlike a stereotypical 19th century hysterical women she firmly defies her father, her fiancé and another elder man.

Usually when Dracula is thwarted and killed the Mina character will return to her former self and be mortified by her recent behaviour. But this Lucy issues a knowing smile as Dracula’s body is borne away bat-like in the wind, implying a possible resurrection that she would be more than happy with. She does not dash in to the arms of Jonathan. The movie ends as she gazes longingly at the departing Count.

This 1979 Dracula reflects the times in which it was made. The women’s liberation movement pushed aside the stereotypical hysterical female who is usually the vampires’ victim and who needs to be protected by a group of heroic men. Bella Swan could learn a thing or two from Kate Nelligan’s Lucy.