When the the fourth series of Being Human began I asked Can Being Human survive without Mitchell, Nina and George? The answer turned out to be yes, but not for long.

SPOILER ALERT- CONTAINS HEAVY SPOILERS OF “THE LAST BROADCAST”. SERIOUSLY, DON’T READ ANYMORE IF YOU HAVEN’T WATCHED IT YET!

As the fifth series began to air in February, the BBC announced that it would be the last. The departures of the original cast caused inevitable anxiety among fans. But during the fourth series, new vampire and werewolf Hal and Tom settled in well at Honolulu Heights, and were joined by new ghost Alex in time to take over from Annie. Her exit to eternal bliss involved blowing up baby Eve to save the world. That was a daring plot choice, and one that a less brave show might have shied away from and found a loop hole for. Now, the final episode “The Last Broadcast” has aired and the series is over. And I have to say I think the final episode was one of its finest.

The series explored a grand plot line. The devil ­– played by Phil Davies (who incidentally was once my landlord and was not that scary in real life) – is holed up in a hotel in Barry, occasionally making people commit suicide. He is weakened but feeds on the energies of conflict between vampires and werewolves. Handily Tom and Hal take jobs there, and as their friendship is put under pressure, conflict is heightened by an Employee of the Month contest. Being Human’s choices to set huge plots in banal settings and circumstances has always been a strength of this show, exemplified again in the character of Rook, the psychotic yet banal grey-suited Civil Servant who will do anything to save his department.

“There’s no shame in living a dream if it is better than reality”.

The finale gets back to the basic theme of the show, what it means for the supernatural characters to try to live ordinary human lives, just as the original cast of characters had attempted to do. Can a vampire, a werewolf and a ghost live together like a bunch of normal housemates, watching TV and drinking cups of tea? In the end they get to do just that, but at what cost? They had earlier resisted the temptation to sacrifice the world to the Devil in order to live out happy existences in alternative dream state realities. In each scenario the characters would never have become a supernatural being, they would have stayed human and never met each other.

Constructing alternative realities and living in unreal dreams that can be better than reality has been the subject of science fiction shows and films. Examples include the episodes of Buffy the Vampire Slayer (BtVS) and Angel, “Normal Again” and “Awakening”, and films like The Matrix and The Truman Show. These works create a literal split between pleasant dreams and nightmare realities, reflecting on philosophical and political questions of how real the “real” world is. Do we really see the world how it is? How free are we to make our own choices? While Marx developed the theory of false consciousness, Baudrillard and Zizek have questioned the realities of a hyper real world of fake experiences driven by television, the media and advertising. 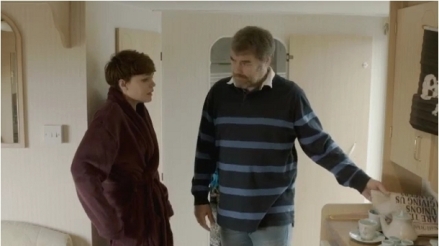 In fiction, constructed realities challenge the viewer to ask if such a dream state could create happiness, and they often do for a limited amount of time. But as characters become aware that their existence is fake and is exploited and controlled by other forces they sometimes chose the more difficult reality over the dream world. Occasionally, they chose to forget the more painful reality and live the dream. If they do not know they are being duped then they cannot feel the pain of it, and maybe they can be happy. This is true of Cypher in The Matrix who wishes he had not been dragged out of the Matrix dream world by Morpheus. The narrative device creates a jarring experience for the viewer, who is played with as much as the characters. We might struggle to detect which world is supposed to be the reality for our characters. But in Being Human the Devil’s offer to the characters and the viewers is transparent and they are given a choice to take it or leave it, being fully aware that what they are being offered isn’t real. But “there’s no shame in living a dream if it is better than reality” says the Devil to Alex to attempt to convince her. All three reject the offer, and go back to the real world. Well a TV studio in the real world at least.

Hal, Alex and Tom go on to defeat the devil (twice, because the bad guy always come back at least once) and after the second attempt are rewarded with that which they have recently rejected. They lose their supernatural traits – which Hal refers to as “curses” that came from the devil. So now that the devil is gone, their “curses” are lifted and the trinity becomes fully human. Not only are they human but they are also together. This happy ending is almost too perfect, raising many questions. Are the three the only supernatural beings out there to have become human? Or are all the vampires, werewolves and ghosts in the world suddenly living as humans? What other changes would happen in a world in which the devil had been permanently and completely removed? Would all evil cease to exist? Well the Antiques Roadshow is still on so I’m not sure about that. Alex had died, so can she really live as a human? Or if there is no supernatural existence anymore, shouldn’t she be –  just you know –  dead? Or would everyone who had a supernatural rather than a natural death have their “curses” lifted and live again? This could lead to a lot of confusion.

Secondly, do our characters deserve a neatly resolved happy ending, which are usually hard fought for? Although they have just saved the world by finishing off the devil which involved an act of self-sacrifice, let’s not forget that Hal started the day with a massacre. In the same show Mitchell was never able to atone for such acts, so that his character could only be redeemed through the end of his life and existence. Hal has a lot to atone for, so when he looks on his human face in the mirror it is perhaps a surprise that he is able to do so without so much as a flinch. I was reminded of how in Angel, former vampire Darla was unable to cope with looking at her reflection in the mirror after she became human. So before the end credits were rolling I had doubts about the credibility of this ending. Sure it is nice to defeat the bad guy and even sweeter to do it without the loss of any major characters. But after George, Nina, Mitchell and Annie’s passing’s – they may have gone on to better places but never shook of their curses to live a fully human life – this ending didn’t seem in tune with previous broadcasts…

Then Hal tells the others that he had told the devil his mistake was to not put the three of them together to live out their dream existences. Serious alarm bells start to ring. Have they been duped or even knowingly sold out humanity for their slice of happiness? Confirmation that all is not as it seems comes when the final shot of the episode is a close up of an origami wolf, the same origami wolf that the Devil had earlier shown to Tom in his dream temptation scenario at Honolulu Heights. The origami figure has to be a reference to Blade Runner and something about the hat and suit the Devil has worn throughout the episode echoes the look of Edward Olmos’s character, Detective Gaff. In the final scene of the film Gaff leaves an origami animal behind as a clue that Deckard is not a human, but a replicant..[i] The origami wolf in Being Human’s final shot hints at two things. Our heroes are not human. And this is not real – because the figure was left there during an earlier dream sequence. And then I realised what a great episode it was. The show managed to weave together themes about what being human means, especially in relation to redemption, and about the reality and perception of happiness, brilliantly.

Earlier in the episode Tom asks Hal – who at that point is still self-serving “bad Hal” – if it is worth striving to be human. Hal claims he is no longer part of that project, but reassures Tom:

“Annie, George, Mitchell, Nina – the two of you – what none of you realised – none of us realised – The desire to be human is the end, not the beginning. To want it is to have it. You’re not wasting time Tom, you already won.”

For me this statement is truer to the spirit of the show than the temptation of an all-encompassing happy ending. The attempt to cancel out and atone for every sin ever committed to receive the literal reward or redemption of being human is not the point. It’s the journey that matters, and what you do along the way. I can’t help making a comparison to the themes worked through in Angel. Angel is attempting to atone for hundreds of years of evil with the promise of a prophecy that after saving the world he will become human. Becoming human is the ultimate reward and redemption. But along the way Angel realises that he shouldn’t be focussing on this reward, but that it is everything that he does along the way that matters. So Hal tells Tom that the reward he is looking for doesn’t matter, what he is doing is what matters. Tom and Alex proceed to carry on doing what they do, attempting to stop Hal from leaving, and to bring him back from the dark side.  And then they are interrupted by the Devil and they earn the reward that we have just heard doesn’t matter.

This end seems to contradict Hal’s statement and annul his moment of clarity. But things are different now, in the Devil’s original offer the threesome would never have become supernatural, they would have simply continued as human. So in order to properly become human they have had to become something else first and work together. But still there is that origami wolf on the mantelpiece so all is not well at Honolulu Heights. We were left with similar doubts at the end of BtVS “Normal Again” when the end of the episode implied that the whole of the show is the imaginings of Buffy while she sits catatonic in a mental asylum. As far as Being Human is concerned there is rumoured to be a special scene on the DVD that will clear things up. Watch this space.