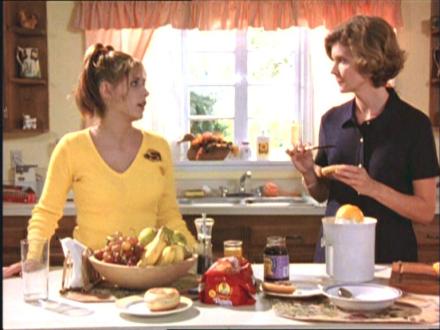 Continuing my Buffy re-watch with Buffy the Vampire Slayer Season 1 Episode 3: The Witch. In this post I will be looking particularly at the theme of mother-daughter relationships which the episode explores. Spoilers? Of course.

In previous episodes Giles foretold that Buffy would face supernatural threats other than vampires, and by episode three the show fully embraced this “monster of the week” format. Although Buffy has accepted her role as slayer, she also wants normal and safe activities in her life, and so is planning to try out for the cheerleading squad, much to Giles’s disdain. We then see a bubbling cauldron and a doll with a cheerleader uniform on, not a good sign.

In typical Sunnydale style, strange things start to happen during the try-outs. A talented aspiring cheerleader, Amber, begins to burn up during her routine. The library research team of Giles, Buffy, Willow and Xander gather to discuss the event in what it is to become their customary prelude to research. They decide to investigate Amber, as this appears to be a case of spontaneous combustion caused by the girl herself, but Willow finds nothing extraordinary about the girl.

On the face of it this episode is about a witch casting curses and competitive cheerleaders, but essentially the episode explores mother and daughter relationships. Buffy meets Amy Madison, a fan of chocolate brownies and an unlikely cheerleader candidate. Amy and Buffy have in common that their parents have divorced and they now live with their mothers; their fathers are both absent from their lives. Amy has recently started to take the idea of cheerleading seriously and her Mom coaches her for 6 hours a day. Buffy’s Mom meanwhile is busy with opening her art gallery and Buffy is put out by Joyce’s lack of attention.

“You have a sacred birth rite Buffy, you were chosen to destroy vampires not to wave pom-poms at people” – Rupert Giles

Buffy’s jealousy of Amy’s relationship with her mother soon fades when she realises the amount of pressure Amy is under from her mother. Amy desperately wants to live up to her mother’s expectations of cheerleading greatness. As she gazes admiringly at the trophies that “Catherine the Great” won she seems fearful of being a disappointment. In the meantime we are fed a red-herring about Cordelia who has been acting a little suspicious, and is also determined to get on the cheerleading squad. But the episode is more about mother and daughter dynamics than teenage competitiveness.

After Cordelia is blinded and is saved from being crushed by a truck by Buffy’s quick thinking, Giles concludes witch involvement; blinding your enemies is apparently classic witchcraft. It’s noticeable that the portrayal of witchcraft in this episode is very different from later developments in Buffy, where it is portrayed as a much less malevolent force.

The group now suspect Amy’s involvement and Giles comes up with a way to verify that during chemistry class. We see Dr Gregory leading the class in his first and second to last appearance.

The next morning Buffy seems extra perky and at cheerleading practice her exuberance results in getting her kicked off the team. Buffy then collapses and Giles recognises she is suffering from a “blood stone vengeance spell”. Giles and Buffy rush to Amy’s house in Giles’s beaten up old car, under the impression that Amy has been pushed into witchcraft to live up to her mother’s expectations of cheerleading. But at the house, Amy’s mother says she doesn’t care about cheerleading. Buffy realises that Amy’s mother has actually switched bodies with Amy to relive her glory days. 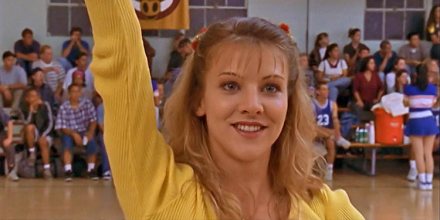 The theme of the episode has been relationships between mothers and daughters, with Amy and her mother being mirrored by interactions between Buffy and her mother, Joyce.

At first Buffy is disappointed by Joyce’s lack of interest in her revived interest in cheerleading, then further annoyed that Joyce suggests it will keep her out of trouble. After Buffy doesn’t make the team Joyce tries to encourage Buffy to join the year book staff, because that was something which she enjoyed at school. Buffy is frustrated that her mother expects her to be just like she was; “this just in, I am not you, I am into my own thing”. As Buffy walks out Joyce sighs to herself about her “great parenting form, little shaky on the dismount”. Joyce often questions her abilities as a parent, especially as a single mother, yet as the episode progresses we can see she is a model mother compared to Amy’s.

Parents will often expect their kids to excel in and enjoy the same interests as them and desire to live vicariously through the achievements of their children. Amy’s mother takes this too literally, she can’t stand to see Amy not living up to her own dreams, so starts to live her life for her, using the supernatural tools of witchcraft to achieve this. 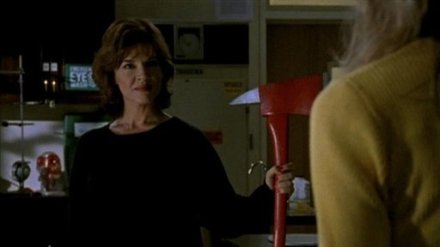 Scary Mom of the year award goes to Catherine Madison

Amy’s mother reveals just how deranged she has become when she confronts Amy and Buffy after Giles has managed to reverse the witch’s spells. Amy’s mother is bitter, “I gave up my life so you could drag that useless carcass around and call it living”. Buffy suggests she should grow up and flips a mirror as the witch casts a spell that will get rid of her enemies for good. The spell ends up consuming Amy’s mother in a horrible allegory for the fate of mothers who choose bitterness.

Catherine Madison is an archetypal evil mother figure. We may find ourselves questioning the feminist credentials of the show for containing such a figure. But the reassurance comes from Buffy’s mother. Joyce is not counter-posed as an angelic, perfect and wonderful mother figure who is the exact opposite of Catherine. Instead she is realistically struggling to get it right. She is the “good enough mother”,[1] who constantly tries to get the balance of parenting right, often questions her effectiveness and on the whole, most of the time, does an alright job of raising her daughter.

The episode ends with Joyce’s reassurance to Buffy that though she doesn’t get it – understanding her 16 year old daughter – she definitely would never want to be 16 again. Though she wants Buffy to do well and has ideas about how she could thrive, she doesn’t want to live through her.

I used to find Joyce’s parenting anguish slightly irritating, I didn’t get it. But re-watching Buffy now that I too am a mother and closer to Joyce’s age and experience than Buffy’s, (yikes that’s scary!) brings a fresh perspective and I kind of do get it…

Other key relationships are developed in the episode. Buffy pushes the boundaries of her slayer-watcher relationship with Giles, insisting that she will try out for cheerleading. However, by the end of the episode Buffy sees cheerleading in the same trivial light as Giles did, reflecting their growing bond. Giles also gains Buffy’s trust as he uses magic to reverse the witch’s spell. Giles will often be seen as a father figure to Buffy.

“I am that comfy with him”

The core friendships of Willow, Xander and Buffy are put into question by their romantic attractions to each other. Xander asks Willow for advice on asking Buffy out and compares Willow to a boy who he can talk to about girls. Willow is not happy about that, hinting at her unresolved and unrequited feelings for Xander. Later Buffy makes her feelings for Xander clear, saying that he is like one of the girls and that she is comfortable with him as a friend. The irony of this may be lost on Xander as his attraction to Buffy will continue and will create further tension in the group. It is interesting to look back at the origins of the core members of Buffy’s friend group. Essentially the friend group is a messy triangle of unrequited feelings and it will take several years for their feelings to be worked out and for the three to actually be friends. Such is teenage high school drama.

What’s to love about The Witch:

Giles: You have a sacred birth rite Buffy, you were chosen to destroy vampires not to wave pom-poms at people.

Xander: I laugh in the face of danger. Then I hide till it goes away.

Xander: Yeah, that is the point, you don’t have to drive it through my head like a railroad spike. (Foreshadowing how William the Bloody supposedly got his name).

[1] Pscychoanalyst Donald Winnicott argued that the way to be a good mother was to accept being a good enough mother.

2 thoughts on “The Witch – mothers, brownies and cheerleaders”