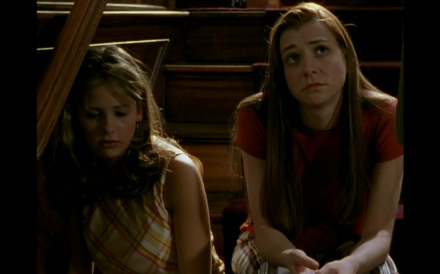 I’m a fan of Buffy the Vampire Slayer – you may have noticed. As such I have also been a long time fan of Joss Whedon. Not only were Buffy and his other shows great, but Whedon is also a self-proclaimed feminist, who has become as well-known as the show he pioneered. All good so far. But last night I read Kai Cole’s account of how Whedon treated her during their marriage, including having multiple affairs and lying about it. It left me feeling sad and sickened.

Of course, monogamy is not a prerequisite of feminism, but honesty about it is hugely important. What’s as disturbing – if not more disturbing – than the affairs is the implication of Whedon’s dishonesty towards and manipulation of Cole. In her piece she writes about how she lost her confidence and suffered from Complex PTSD. To read of how he seems to have acted in a way to cause this is disturbing and distressing.

The revelations have come as a shock to many fans of Whedon and his work. Whedonesque – the Whedon community blog – has announced today that they are closing down. Well that escalated quickly then.

In fan discussions on social media some fans have questioned Cole’s allegations. As is often the case, women who have experienced mistreatment are expected to provide overwhelming evidence to be believed. Others have been quick to distance themselves from Whedon and everything he has ever done.

Many of those criticising his feminist credentials have done so for some time. The focus of their criticism has been on Whedon’s work. Just as an example, I am linking here to an article written by Natasha Simons in 2011, so the author can hardly be accused of jumping on a new anti-Whedon bandwagon. They raise interesting points, that I don’t necessarily agree with, but that are nevertheless part of a discussion that is definitely worth having.

I have loved Buffy the Vampire Slayer and Whedon’s other shows for a long time. I believe they were way ahead of their time in their representation of women. However brilliant the shows are I do acknowledge they have flaws. As in all areas of life, we always have a lot to learn. But Buffy is still brilliant, and I won’t stop loving it. The stories that Whedon has been a part of creating have had a positive impact on the lives of many. They have helped make it possible for TV to be made in different ways and put women’s stories at the forefront of them.

As fans we have had high expectations of Whedon, partly because he identified himself as being a feminist in the first place. But he should never be placed beyond criticism and I do think the way people conduct themselves in their personal lives is important.

However, I don’t think that yesterday’s revelations should destroy the contribution made by Whedon and Buffy. I won’t be denouncing the show and refusing to watch it. I will continue to watch with a critical eye.